The intelligent English woman was keen to make connections wherever she went. She was an ardent believer in freedom for those living under colonial rule, becoming particularly impassioned when she met the future president of Kenya…

Cranleigh Street is a short 6-8 minute walk from Euston station.

Amy Geraldine Stock, known as Dinah to her friends, was a member of the British Labour Movement, an organisation sympathetic towards Indian and African nationalism. By 1927 she was the secretary of the Centre against Imperialism along with Independent Labour Party (ILP) politician and anti-war activist Fenner Brockway. She had adventures all over the world, including a stay at Gandhi‘s Ashram in India.

Her influence and authority amongst anti-colonial circles has largely been overlooked. Today, no tangible trace of her presence in London can be found apart from the apartment which she shared with Johnstone Kenyatta in the 1930s… 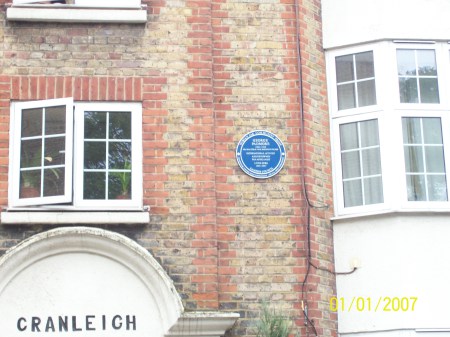 George Padmore is the only activist commemorated at this address. Photo courtesy of Laura Leonard.

Moving in with Jomo

In 1936 Dinah and friend Elsie were inspecting a flat at 15 Cranleigh buildings, Camden Town. Around this time, she met the Kikuyu student Jomo Kenyatta who was working with George Padmore and C.L.R. James to campaign against Italian rule in Abyssinia (modern day Ethiopia). Stock and Kenyatta first met at at a anti-imperial meeting, where Johnstone was introduced as a student in need of help with a book. Dinah offered to edit his anthropological study of his people, the Kikuyu.

By 1937, Kenyatta had moved into Dinah’s flat in Cranleigh buildings where they entertained various anti-colonial activists, especially George Padmore who lived in the same building. The well-travelled English woman helped propel Kenyatta into the limelight. They collaborated on articles together using her connections at the publications the Manchester Guardian and the New Statesman.[1] She was able to equal him intellectually and help him improve his command of English. In 1939 they fled London together as war broke out, moving to Storringham, Sussex.

After the war, Stock kept in touch with Jomo,and continued to fight to end imperialism.

What do you think public perceptions of Dinah Stock were during the 1930s?

Why do you think female activists are less recognised than their male counterparts?

Within walking distance of Cranleigh Street is the Institute of Race Relations, the organisation which once attempted to control the colonies, and now works to protect those at risk of discrimination in the UK.

One thought on “Dinah Stock”